It was one of those moments… one kid was tired, one kid was hungry, one kid was thirsty, one wanted to be read to, one was screaming, one had to pee, one was cold, one was hot.   I think that count is at 8 yet I only have four children… although the volume in the motorhome sounded more like 8 kids… on the Scream Machine. We were in need of a break but we were trying so hard… too hard to make it to the campground we had just made a reservation that same afternoon.

Then all fell silent!

Because it sounded like the roof of the motorhome blew off.  There was suddenly a loud noise and it wasn’t humans.  Now would be a good time to mention that we had been driving about 2 hours straight in 25mph South Dakota winds.  Two hours might not sound that long but for a motorhome towing a van in the South Dakota hills, it’s a really really long time.

Well, we got that much needed break we all desperately needed.  And we also almost lost the three vents on the top of the motor home.  All three vents were hanging on by one last screw.  All three had blown open while driving which is what created the “our roof blew off” sound.

Thank you to man who offered us zip ties to tie the vents back in place. 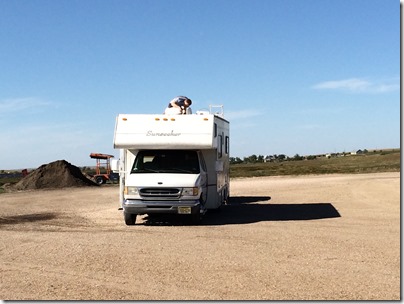 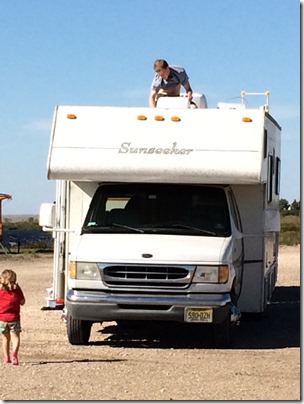 It may appear in this picture that Jeff is wearing a crop top.  Trust me when I tell you that he is not and that this is wind practically blowing his shirt right off his body.  At one point, one of us opened the door from the motorhome to go outside and the wind  blew the door so hard that it actually put a hole in the outside of the motorhome.

And what were the kids doing? 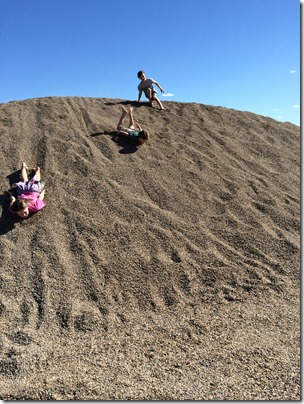 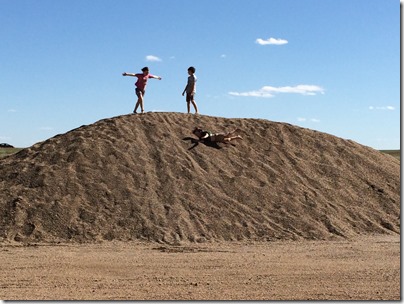 Sliding down a pile of dirt in the lot we were parked in… or at least we hope it was dirt.

Only three kids is these pictures… where was #4? 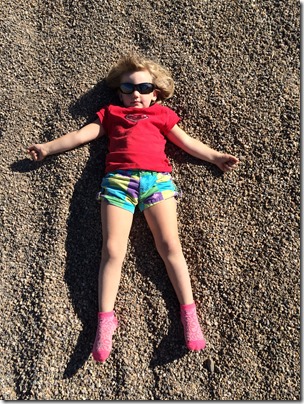 Soaking up the rays of the South Dakota sun.

God has a funny way of giving you exactly what you need.  We needed this time outside, even in the wind, to let go and unwind for a bit… sometimes it takes a little unexpected turn of events for me to do exactly what needed to be done anyway.   This little story could have had a terrible ending but I am thankful we were are all safe and so was everyone else on the road that these vents could have easily hit had we gone any further.