We said good bye to PA today but not before a last splash in the sprayground, some tie dye fun, a hay ride, and one lucky lady found the first silver coin hidden throughout the campground. 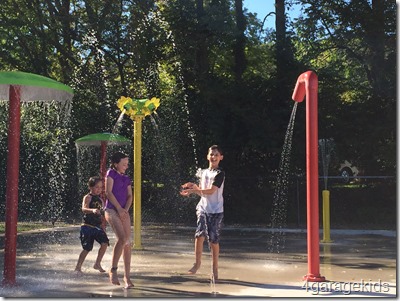 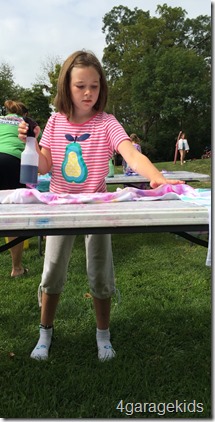 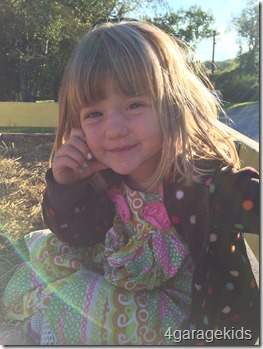 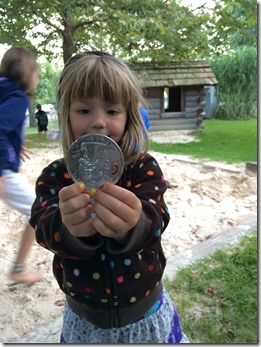 And the lucky lady.

It was a long day of driving from PA to OH.  It’s much hotter here, in OH, than it was in PA when we were in the mountains. Three quarters of the way to our destination the air conditioner in the cab of the motorhome failed on us.  Not only did it fail us, it completely switched from AC to heat!  I think the stuffy RV is what put 3 of the four kids to sleep for a good hour.  When we arrived here in Streetsboro, OH, we were ready to get out and swim and play and explore.  The only problem was the battery in the van was dead (and we were parked in the middle of the road).  Thank you to the man who helped us jump the van (everybody is friendly at a campground)!

We are learning along the way, about downshifting and disengaging overdrive to avoid smoking brakes, making sure any thing that could drain a car battery is off or disconnected, and that the hot water heater that we thought was busted was really just a push of a button in the right direction.  Like I said we are learning, and it has been fun. 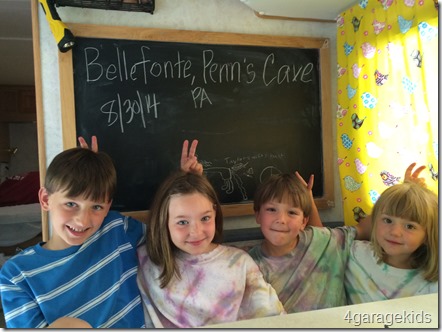 Until next time Pennsylvania…

I will say this place is a little touristy and it could get little pricey for a family of 6 if we did the combo deal of the wildlife tour and the cavern tour.  We decided to just do the cavern tour (which was pricey enough) and being that I am traveling the country I am technically a tourist every place I go so sometimes touristy is worth the time and money.

The kids said this place was really cool, literally and figuratively.  It’s a chilly 52 degrees 100 feet below the ground.  We saw amazing stalactites and stalagmites and we learned about how this cavern was formed thousands of years ago. 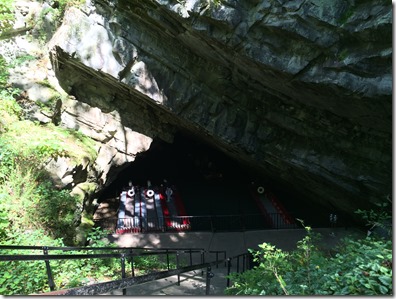 Getting ready to board the boat. 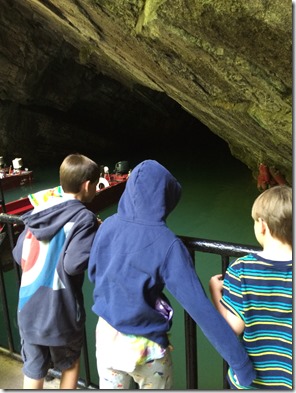 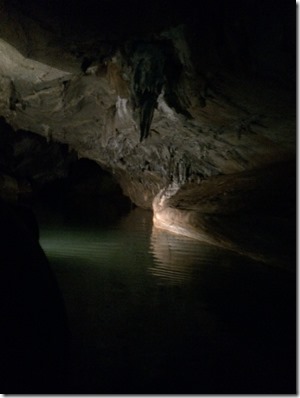 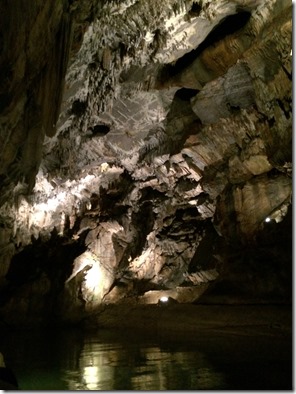 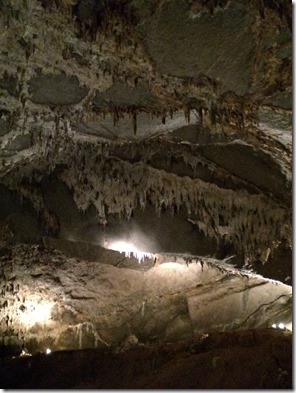 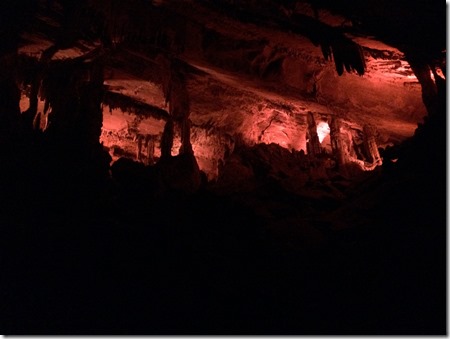 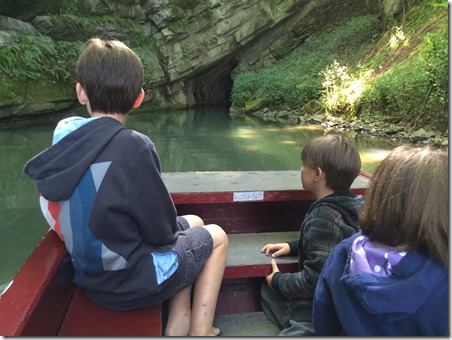 Freya was thankful to see daylight again… but then we realized we needed to go back to where we started from.

I have to be honest, as much as I love rides, I’m not of big fan of amusement parks (mainly cause my kids aren’t).  But this place is just cool and so worth the stop.  Knoebel’s rides work with tickets so the fact that I didn’t have to pay an admission fee was great.  Staying at the campground is great because you can walk back and forth to your campsite for lunch/dinner or just a break. 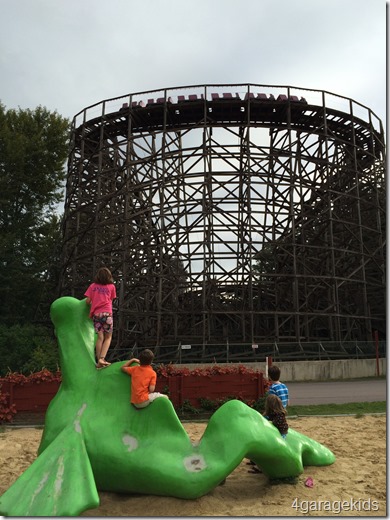 They all watched but none would partake in The Twister. 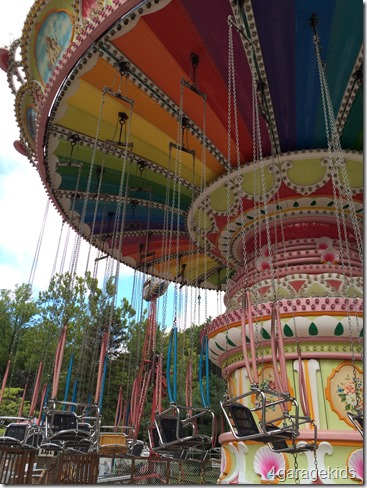 I happen to like this ride, the Italian Trapeze.  This ride reminds of the day my late grandfather took me to Coney Island for the first time.  This was the only ride I would go on. 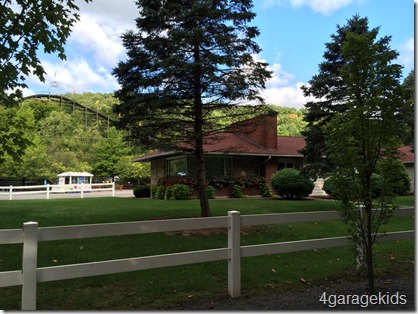 This house is in the middle of the park.  And if you are rushing you will miss it.  When I pointed out the house to the kids, Korben said,  “If I lived there I would make a lot of money at a garage sale.”  (He only made $4 at the garage sale we had a few weeks ago.)

Because there is no admission fee and we stayed at the campground we were able to roam around the park before it opened at 11am.  I think my kids enjoyed the hustle and bustle of watching the staff set up just as much as they enjoyed the park when it was open.  We scoped out all the rides we wanted to go on and then went back to camp and planned out our day.  It worked beautifully to have a written plan of what was important for each of us.  I have one child in particular who likes to have a very clear plan so the fact that we were able to see the entire park first and then write a plan was perfect.

And I have to mention the staff.  These people are the friendliest staff I have ever encountered.  I know, I come from New Jersey so it doesn’t take much.  Really though, we must have looked lost because a staff member approached us and asked us if we needed some assistance.  After asking for directions to the bumper cars, he then preceded to escort us to them. 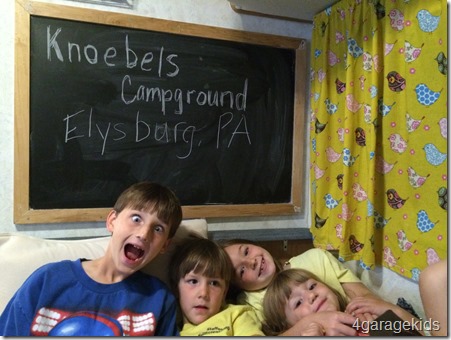