Today we made it to Minnesota.  We are staying in the town of Winona, in the bluffs right along the Mississippi River.  It is breathtakingly beautiful yet impossible to photograph. 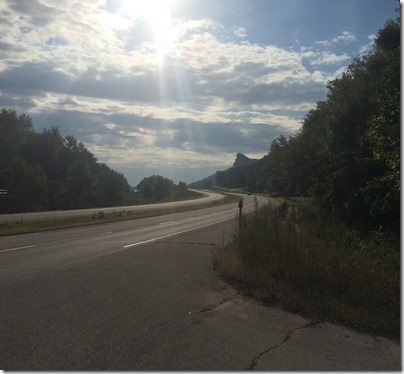 This is highway 14 which hugs the Mississippi River to the left in this picture and the bluffs and coulees to the right.  The word coulee was new for me.  I had no idea it meant deep ravine.  We drove this road several times while here (it’s the only road) and each time was as beautiful as the next.   When Makenzie saw the mountain in the distance she immediately said,  “That is how I pictured God’s thumb to look like from the book Holes.”  We all agreed with her the closer we got. 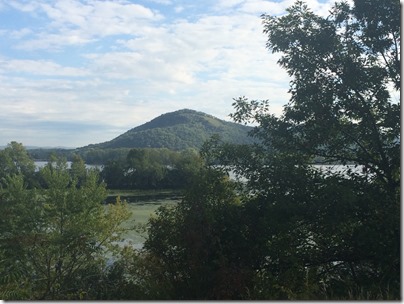 That’s the Mississippi River out there.  Like I said, I had a hard time photographing the river… maybe it’s because I’m so darn tired! 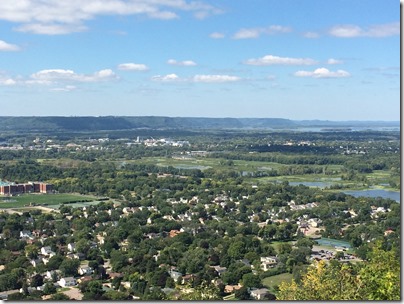 This is the view from the Grandad Bluff in La Crosse, WI.  You may ask why we are back in WI?  The main reason is because we found someone willing to fix the AC in the motorhome… for the price of $550…ugh!  But worth every penny as temps are rising this week into the low 80s. Oh, AC how I’ve missed you! 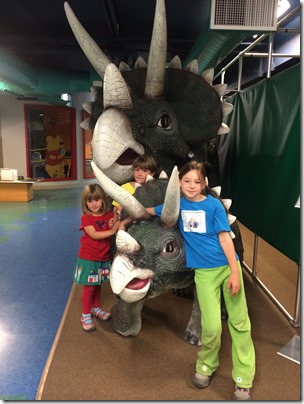 We are also in WI because there is a children’s museum in La Crosse that we were checking out while the motorhome was getting fixed.  It is part of the passport museum  program so we entered for free.  The museum was nice but was definitely geared toward a younger crowd.  This usually doesn’t stop my kids, they still always find something fun to do.  But after about 2 hours they were finished.  Off to the public library, why hadn’t I thought of this before?  Complete silence,  a beautiful thing after living in an RV for almost a month.  I almost fell asleep at one point until Koah came to me asking me questions about a Star Wars book he was reading,  “Uh, ask Daddy.” 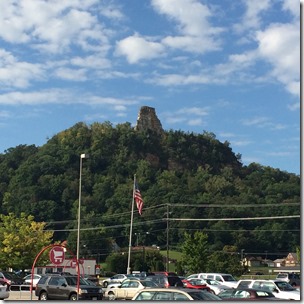 We learned that this stand alone rock formation is called the Sugar Loaf, while in the Target parking lot in Winona. 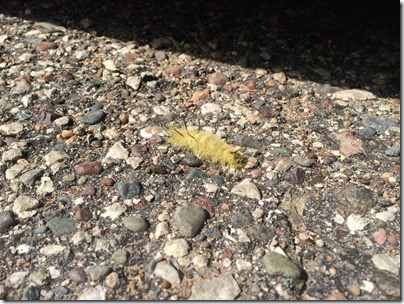 This is the American Dagger… well technically it will be when it becomes a moth.  The black spikes on this are considered to be mildly poisonous by some and not poisonous at all to others… go figure.  As I’m looking at this picture I’m realizing it doesn’t look all that impressive.  Like I said I’m tired.

I really enjoyed this town and would love to come back to do some hiking and summer water activities.  Onward, further into Minnesota…but first some sleep.

I fell in love with this town.  Nestled along the coast of Lake Michigan is the town of St. Joseph.  With it’s cobblestone streets, clean beaches, and beach playgrounds I imagine this is a popular destination in the summer for many Michigan natives.   Also, not far from the beach is a giant fountain for cooling off in on hot summer days.  We arrived into town around 5.  The kids played (and so did I) at the Discovery Zone which is approximately a block away from the beach.  It happened to be half price Thursday so it was $3 per person to get in.  It was worth the $3 but not quite worth $6.  It is definitely geared toward younger children but because there was a water table my 10 year was in heaven.  The carousel also happened to be half off as well. 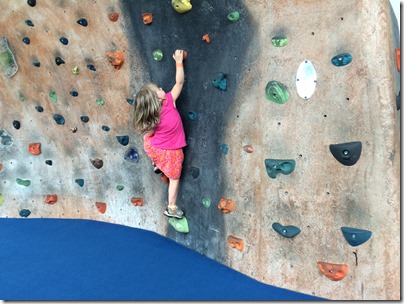 This girl is so strong! 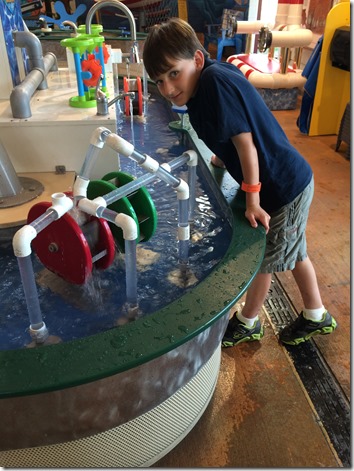 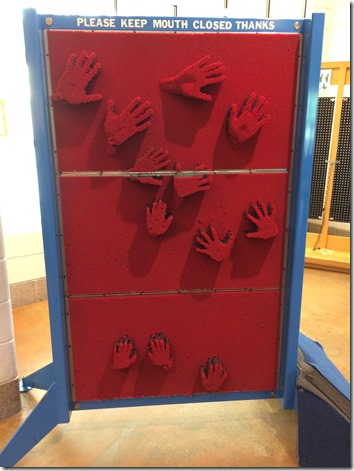 We had so much fun with this peg board. 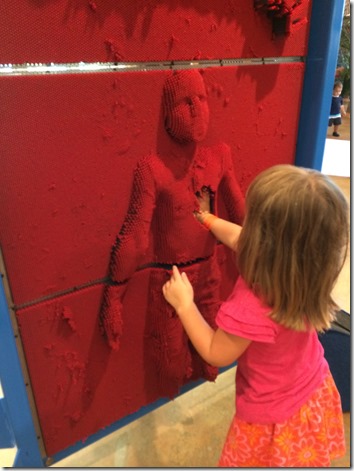 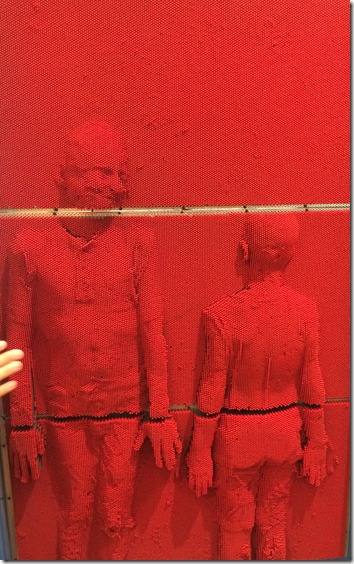 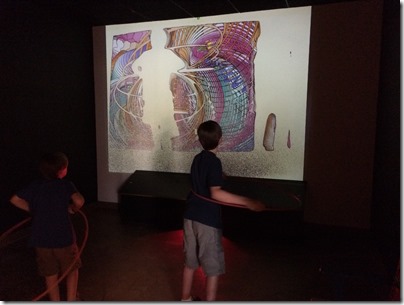 When we finished the Discovery Zone and had a ride on the $700,000 carousal (that’s a post for another day) we were just in time to see a breathtaking sunset over Lake Michigan. 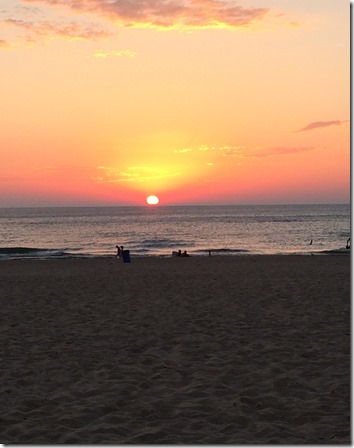 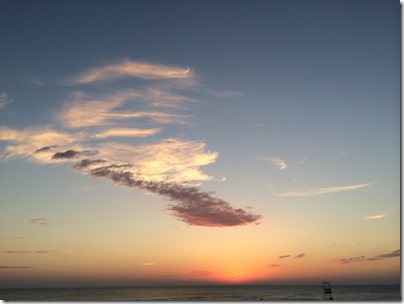 I was in search of a grocery store today.  We were in desperate need of fresh veggies and fruit.  Our location here in MI is a little remote, especially compared to what I’m used to (a Shoprite and Home Depot about 2 miles away).  I found this place up the road a bit and hoped that I could score some produce for a salad.  I knew this place sold meat… I did see the cow ,pig, and the chicken out front.  But all 3 animals were happy, why?… because they were alive, well sort of they were really plastic statues!  Now, why would a meat market place statues of animals alive in the front? 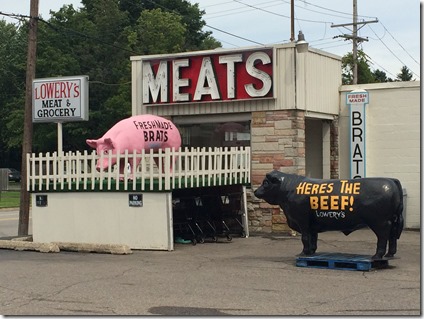 The first thing I see, when I go in, is an employee shooing gnats off the half rotten bananas.  I moved on passed the bananas and turned the corner.  I quickly realized that people don’t come here for produce, the locals only come for meat, and meat only.  I have never in life seen this much meat nor have I ever heard of the various kinds of meat.   I grabbed a number because it seemed like the thing to do, not really having a clue what I was going to buy. The place was packed so I waited a long time for my number to be called.   After a brief chat with the fellow helping me I left with 10lbs of chicken, 3lbs ground beef, and 8 of their famous brats.  Jeff was one happy man when I returned home!!

Now about the free hats.  We had met a couple last night while doing our laundry who loved that we were traveling while schooling our children.  In their words, “You are giving your kids the best education possible.”  John and Betty invited the kids and I over to their camp site the next morning.  One of John’s hobbies is knitting hats on a hat board.  He had 2 containers of knitted hats and asked us each to pick one.  Thank you John and Betty for 6 of your awesome hats.  We are going to need them when we reach Yellowstone! 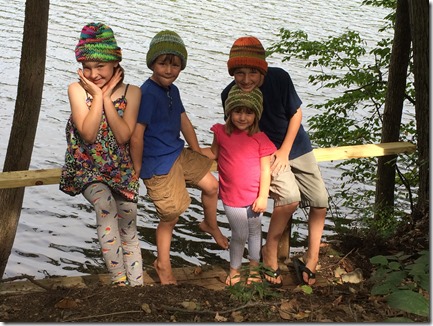 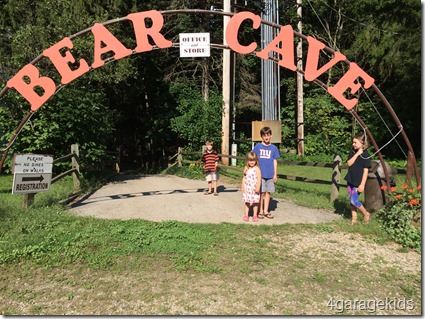 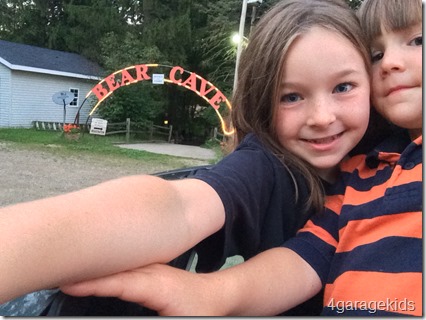 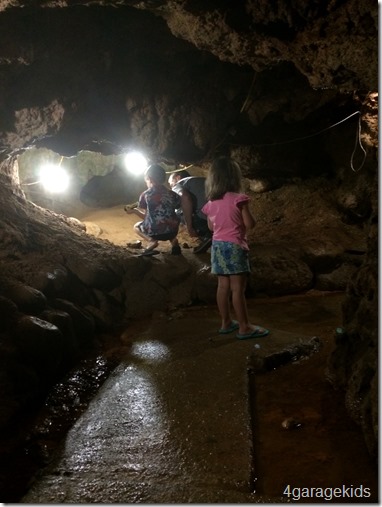 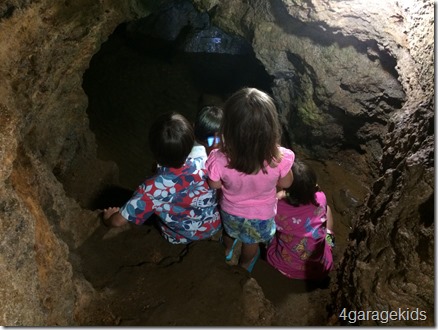 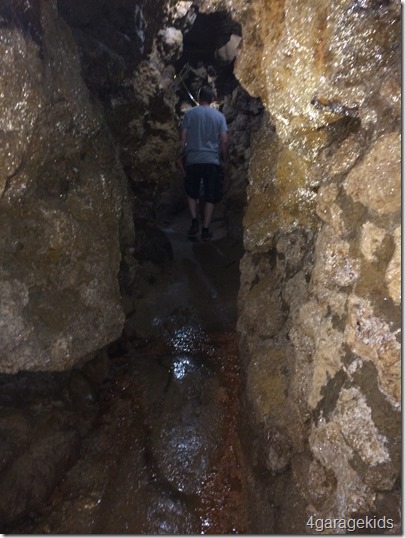 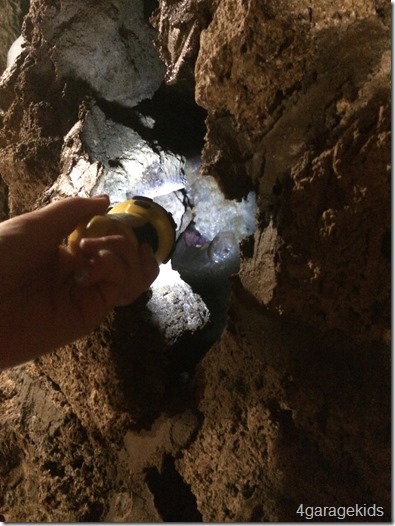 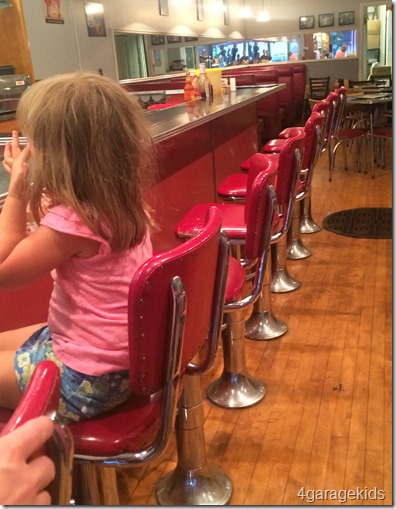 What a fantastic day at this state park here in Michigan.   When we were driving into the park it didn’t appear that the park was going to hold up to its name. The initial drive was pretty but there were no sign of dunes, that wasn’t until we turned the corner and in sync all said “WOW!!” 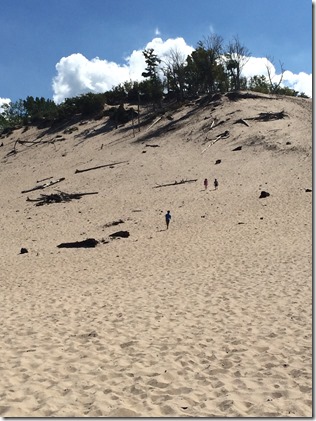 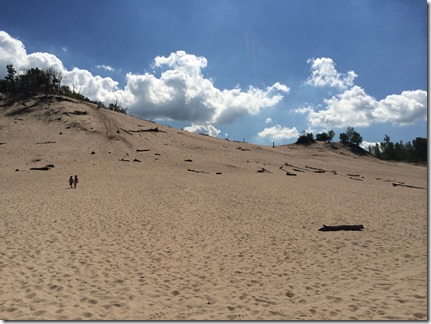 It is hard to see the massive size of these dunes in these pictures.  But to try to give you an idea that is Korben, Makenzie, and Koah hiking up to the top in the first picture. 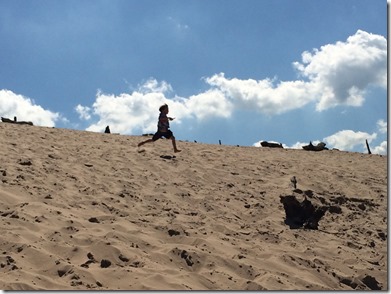 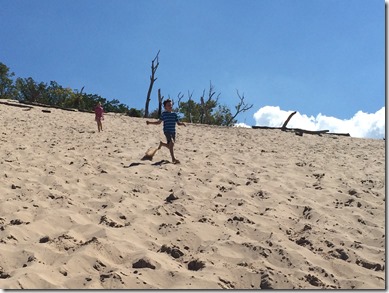 Now for the run down. 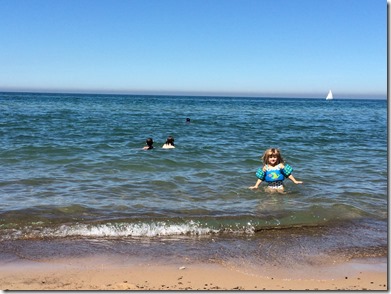 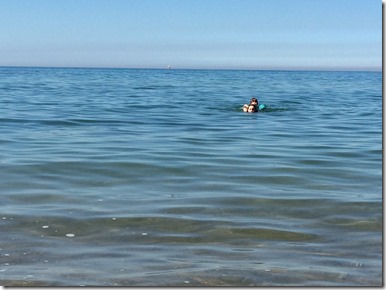 And after all that running, what better way to cool off than a swim in Lake Michigan!  I was really impressed on how clean and warm the water was. 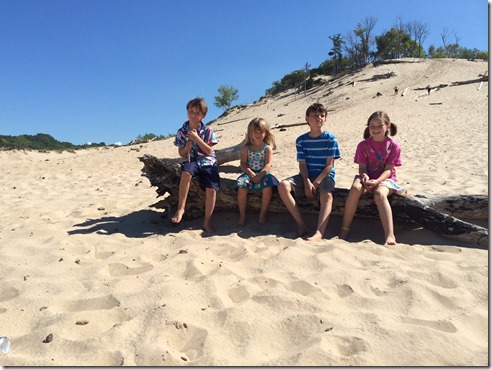